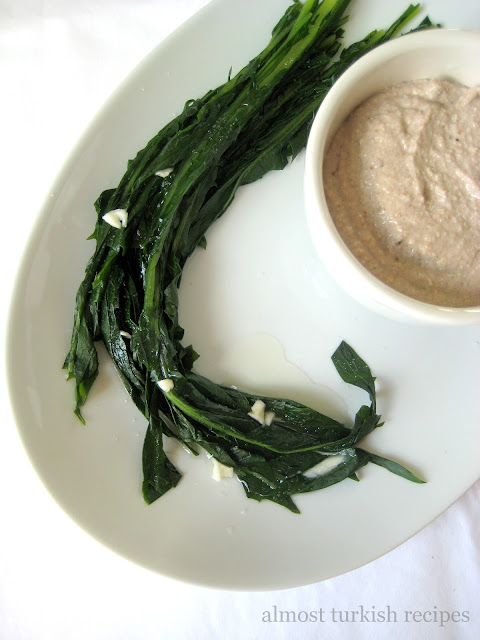 If cooking every dish (sweet and savory) in olive oil is one of the most important characteristics of the incredibly healthy  Cretan cuisine, boiling all greens including weeds is the other one. The Cretan diet, widely accepted to be one of the healthiest diets, became an indispensable part of Turkish Aegean cuisine through Cretan-Turks who were compulsorily exchanged for the Turkish Greeks of Anatolia starting from May 1st, 1923 based on the treaty of Lausanne. As a result of this agreement between Turkish and Greek governments, half a million Greeks left Turkey and approximately one million Turks left Greek. And through this non-humanitarian and tragic population exchange which caused thousands of dislocated families and hatred between nations the west coast of Turkish cooking is enriched by this cuisine.
This is a very simple recipe that captures the essence of Cretan cooking: greens and olive oil. Dandelion greens, like many other weeds, are widely consumed in Cretan cuisine with a simple olive oil dressing and tarator sauce. Eren Aksahin in an article about Turks of Crete (read the article) quotes a little anecdote about Creteans’ infatuation with greens:

“A Cretan goes into a field with a cow. The son of the field’s owner runs to his father, and says “Papa! A cow and a Cretan are in the field! What should I do?”  His father answers: “don’t bother the cow, she’ll eat until she’s full and leave. But the Cretan will gather everything before he leaves. So chase the Cretan out!” 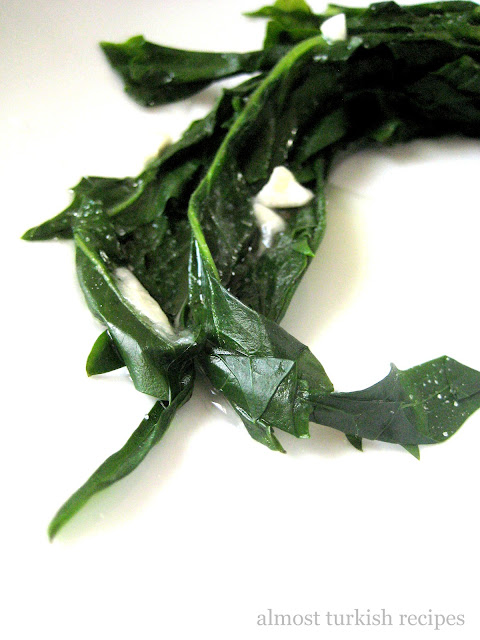 1 bunch dandelion greens
1/4 cup olive oiljuice of 1 lemon
1 clove of garlic
salt
-Boil enough water for your dandelion bunch in a pot with some salt.
-Add dandelions and cook for 5-7 minutes, depending on freshness of the weed.
-Blanch dandelions for 3 minutes.
-Squeeze excessive water and lay on a plate.
-Mix olive oil, lemon juice, and crushed/minced garlic with salt and pour over the dandelions. (Adjust salt, lemon, and garlic to your taste)

for tarator sauce
2 slices of white bread (cannot stress the importance of the whiteness of bread for this sauce), crusts removed
1-2 cloves of garlic
juice of 1 lemon or 2 tbsp vinegar
1/2 cup ground walnuts (although walnut is more common, some prefer pinenut for tarator sauce)
4-5 tbsp olive oil
salt

-Soak bread slices in 1/4 cup water, squeeze excessive water.
-Put all in a food processor and pulse until smooth. The sauce should not be very runny or thick as a paste. Add a couple of drops of water or lemon juice to loosen up. 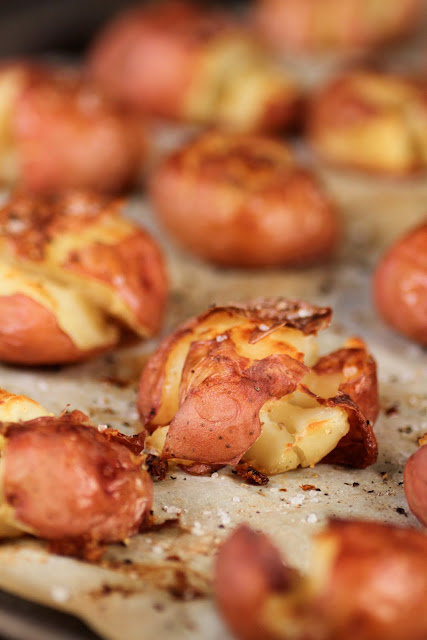 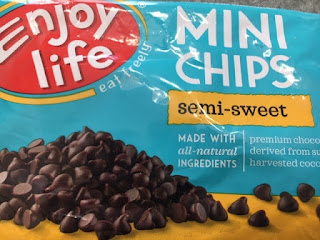