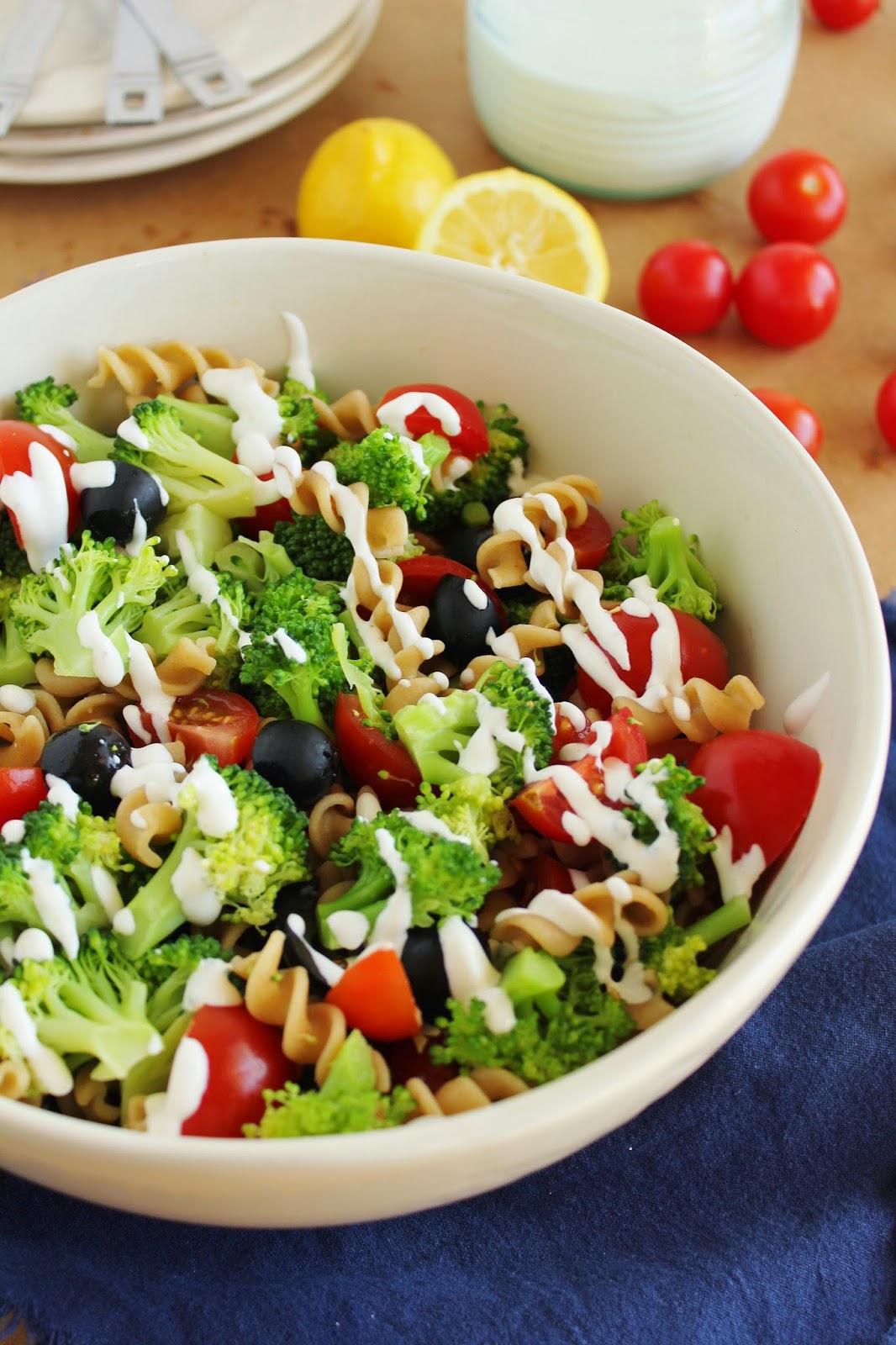 Hello dear friends! It’s been a few days, eh? Okay, more than a few. But I promise it was for a really good reason. My little family has been spending the week at Coronado beach in San Diego. It was the most relaxing week we’ve had in such a long time. Instead of blogging ahead, or checking in on the blogging & social media world incessantly, I did something I think everyone should do often:
I unplugged from it all.
I turned off my dang phone.
I ignored the hundreds of notifications I get on a daily basis.
I didn’t check up on my favorite bloggers to see what amazing/fun/fabulous thing they were up to this week.
And something really awesome happened…
It was the coolest week of my life.
I think it’s pretty healthy to unplug. We get so caught up in everyone else’s lives, what they’re doing, who they’re with, what parties they’re attending, what amazing fashion shoots they’re in or organizing, how many recipes they are ahead of the game, and how amazing their lives seem through social media.
But you know what? I spent the week doing something even better! I gave 100% of my attention to my boys. I played on the beach with my son and husband. I soaked in the sun. I listened to the waves, felt the sand under my feet, and actually felt relaxed and rested. It was the break of a lifetime. After being unplugged for so many days, I felt like my life was so much better. I didn’t care what the heck people where up to. I just cared about our little world, my boys, and what we were up to. It was really, really nice. I can’t even begin to describe how therapeutic it was. 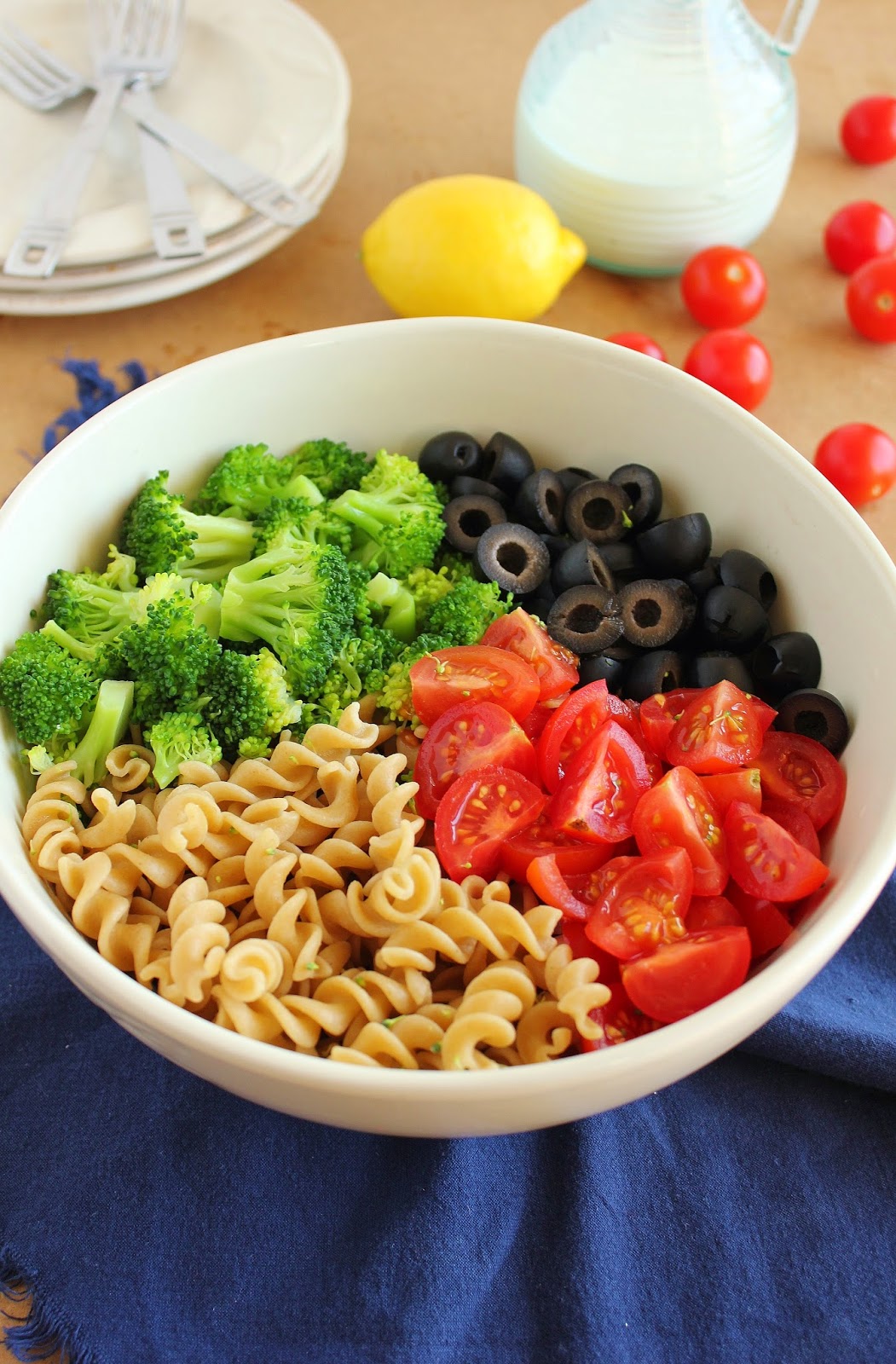 I missed cooking so very much, though. I missed our little kitchen and whipping up healthy-ish dinners for my boys. Going out to eat was less of a luxury, and more of me wishing for more fresh fruits and veggies with my entrees. So, here we are, back in the kitchen! We already have something in the crock pot for dinner, and I’m knee-deep in making a grocery list for this week’s dinners. I can’t wait to share some of the recipes I have, though, for you – lots of fun stuff going on the blog this week!
This first one is this SUPER easy pasta salad. It’s bright and colorful, and doesn’t leave you feeling stuffed at all after indulging in a plateful. This would also work really well as a side to some fresh baked/grilled chicken, or even something lovely to bring to a potluck-style gathering. 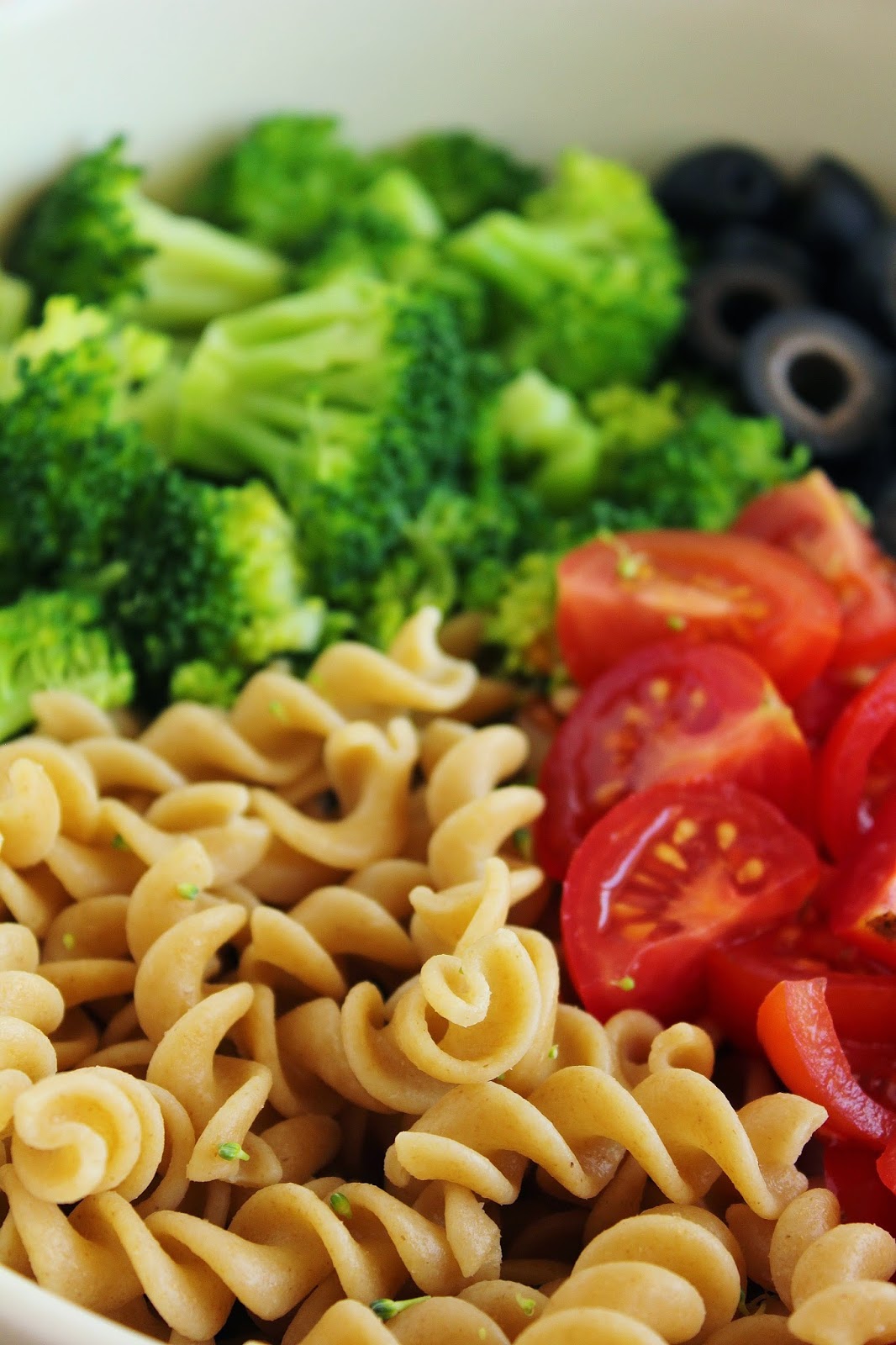 If there’s pasta in a dish, I’m almost always using whole grain/wheat pasta. It’s hearty, and I feel like it goes a longer way in filling up my family’s stomachs at dinnertime. 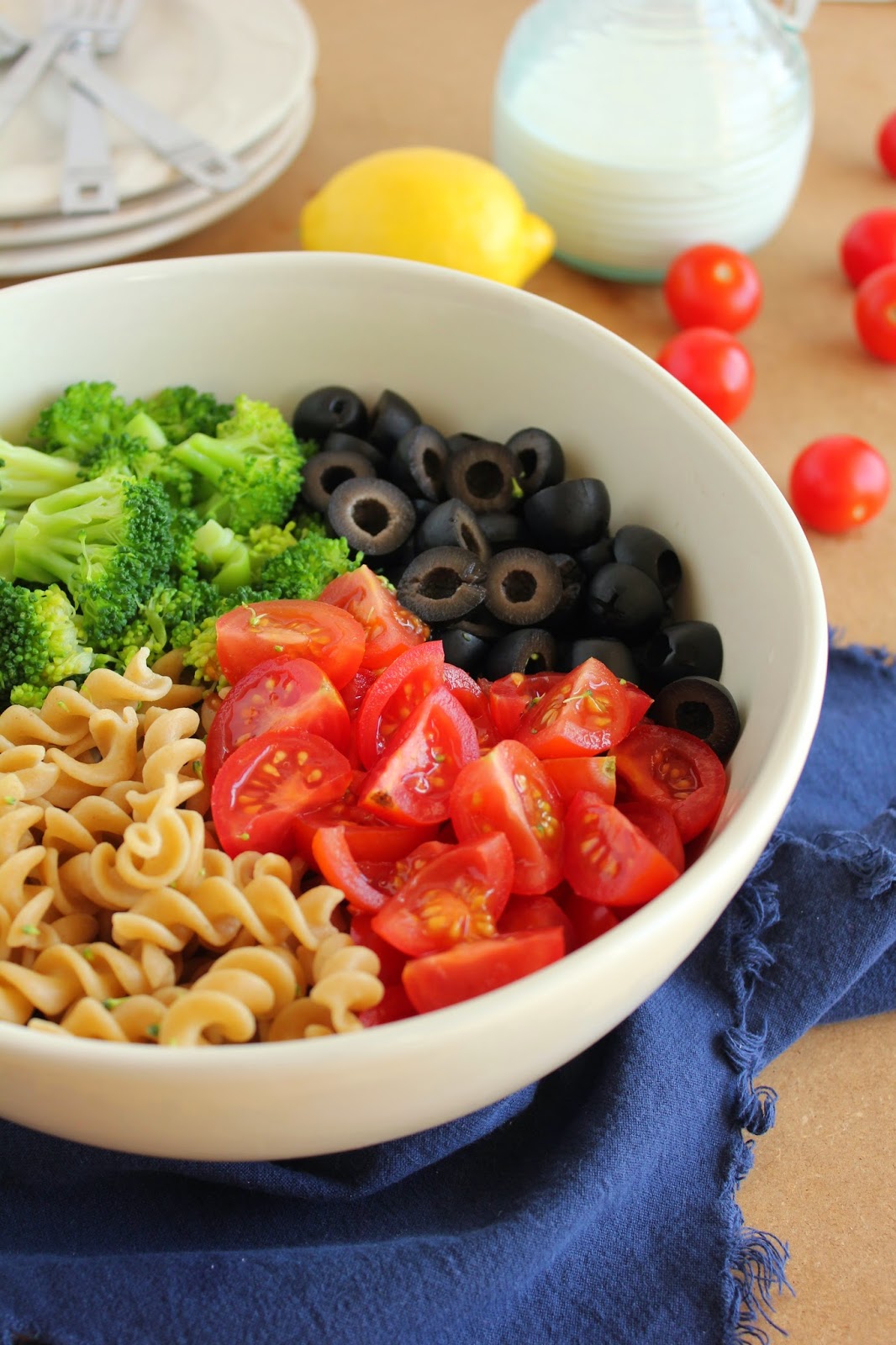 The ingredients are super-simple. I’ve been on a huge broccoli kick over the past few months (check out my Fresh Broccoli Salad with Cheddar, Baked Potato with Broccoli Cheese Sauce, and my Fresh Broccoli Salad with Apples and Walnuts) so using broccoli was a must! The pasta was already boiling away in the pot of slightly salted water, so I decided to toss in the broccoli in the last minute to give the broccoli a fresh steam/boil to soften it up a little bit. It’s not enough to make them super-soft, but just enough to keep a little bite to each piece. You don’t have to do this, but I think it fits best with this specific salad. 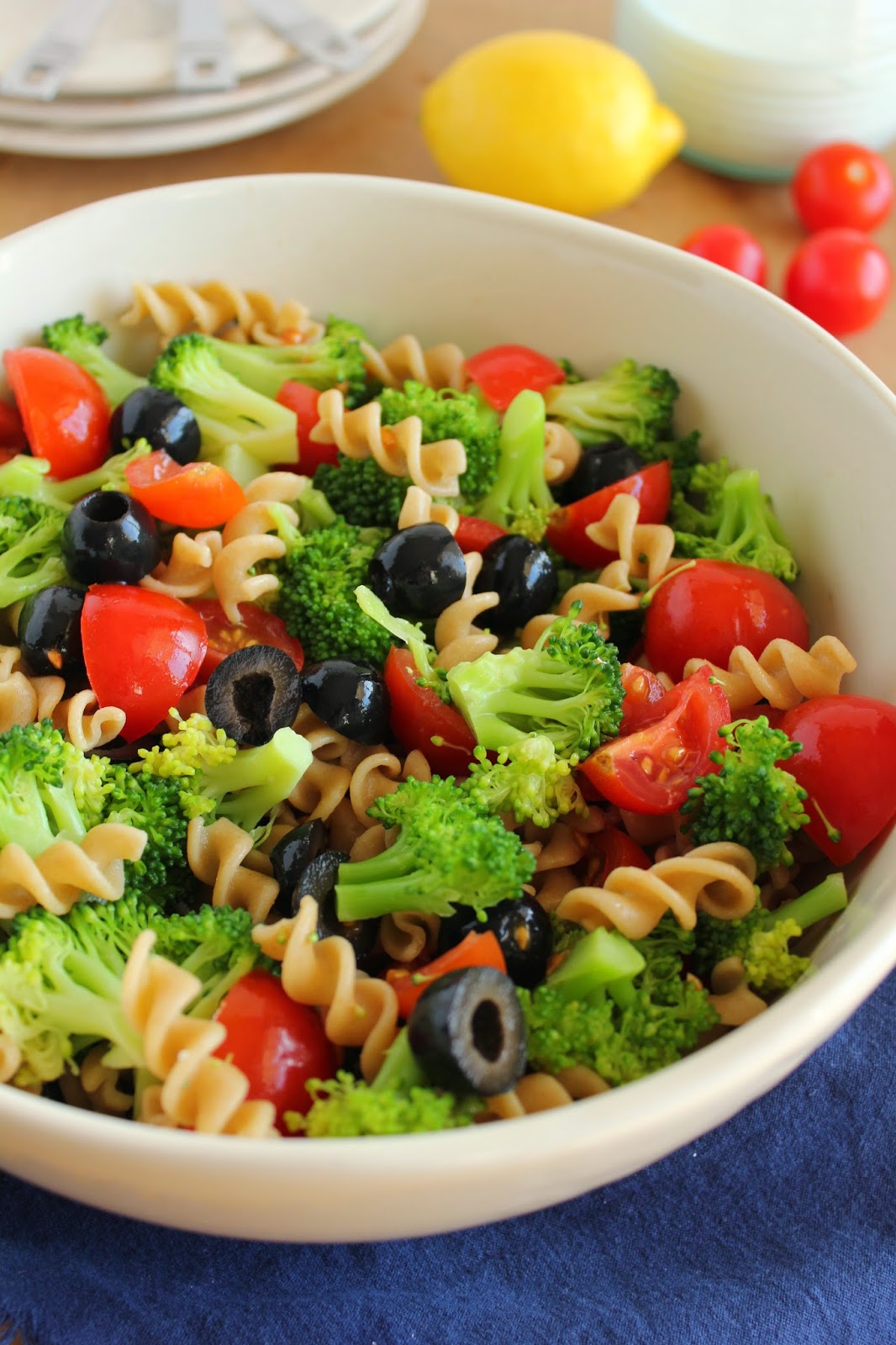 Lastly, the dressing. It’s very, very simple. The lemon is the star, and brightens up this dish beautifully. Instead of using mayo, I used almost all greek-yogurt. If greek yogurt isn’t your thing, go ahead with the mayo and maybe use part sour cream. Dressings are super versatile, and you can make them however you want – by using what you already have. 🙂 Dude, I need to write that tagline down. I like it!
Anyways, see you all again on Wednesday! xoxo 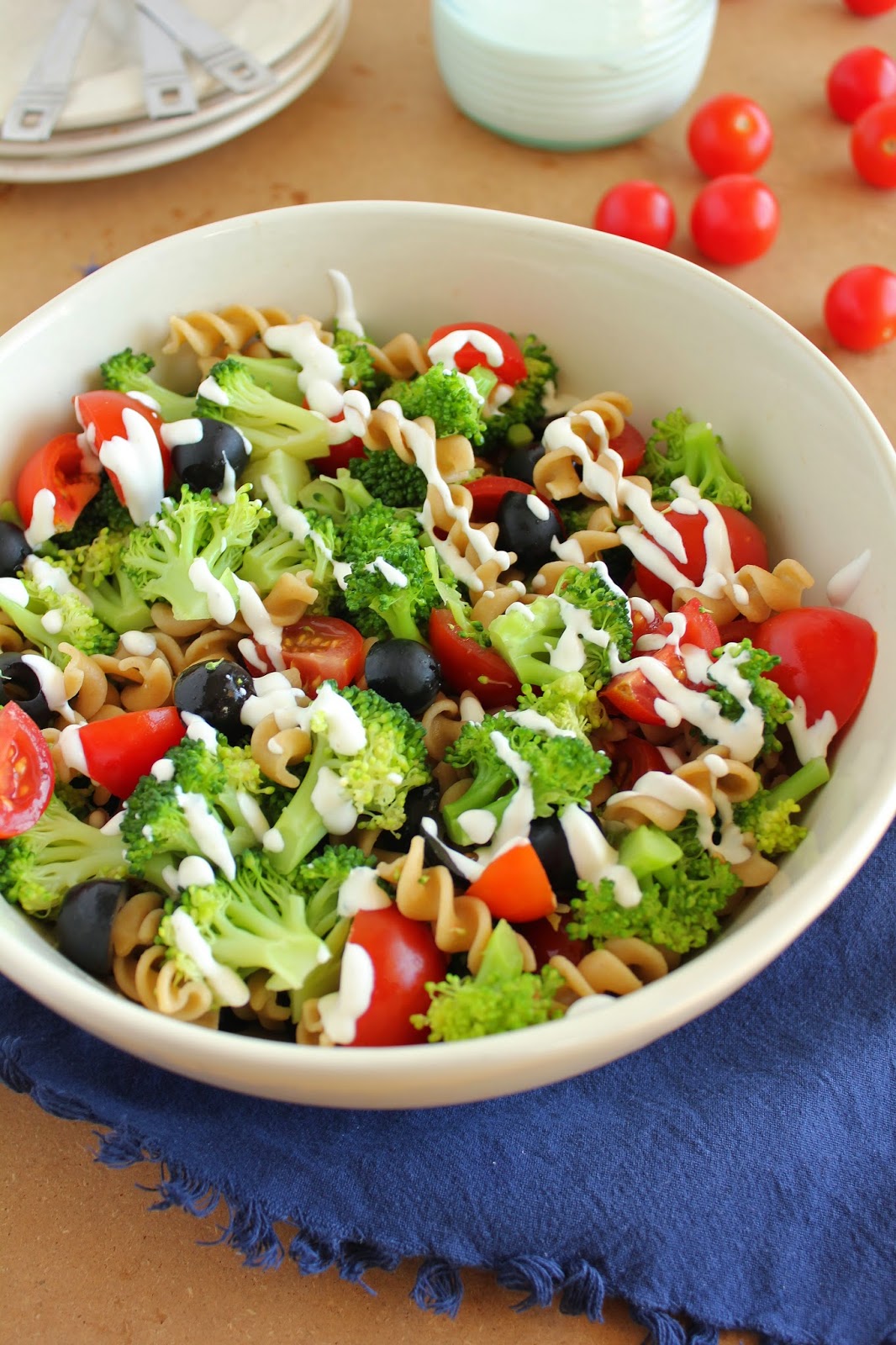 Pasta Broccoli Salad with
Creamy Lemon Dressing
makes 4 servings
ingredients:
2 C uncooked whole wheat spiral pasta
2 C raw broccoli, washed & cut into small florets
3/4 C cherry tomatoes, halved
1 can black olives, sliced
1/4 C greek yogurt
1 t milk
1 T fresh lemon juice
1/2 t sugar
1/4 t garlic powder
salt and pepper
method:
1. In a large pot, boil pasta according to the directions until al dente. Toss in broccoli in the last minute to steam/boil as well. Drain them both together. Combine them in a large bowl with the chopped olives and cherry tomatoes.
2. Make the dressing by shaking/stirring together the greek yogurt, milk, lemon juice, sugar, garlic powder, salt, and pepper, until thoroughly combined. Add a little more milk if you want it to be a bit more thin, less if you want it thicker. Serve immediately with the salad, or store in the fridge separate from the salad for later.
recipe adapted from: brunch time baker
thanks you. 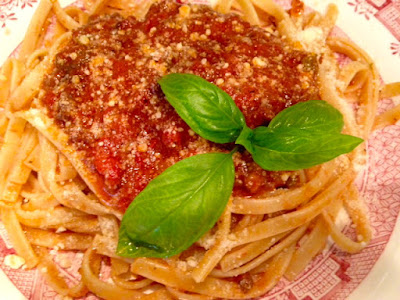 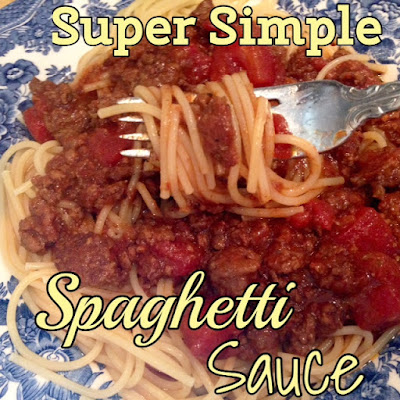 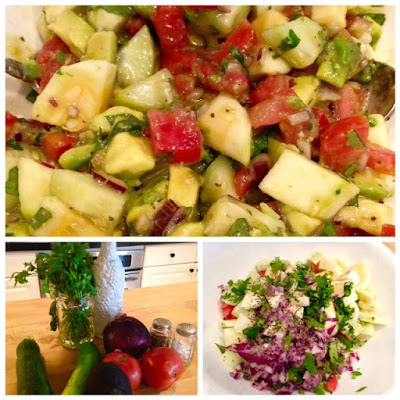