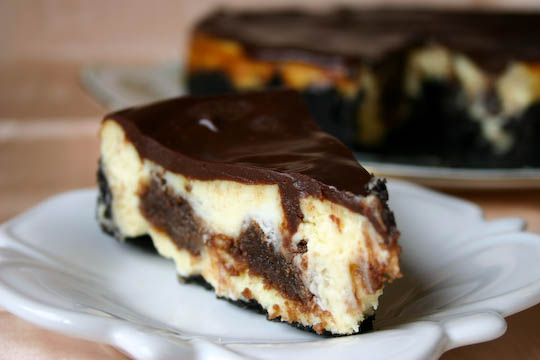 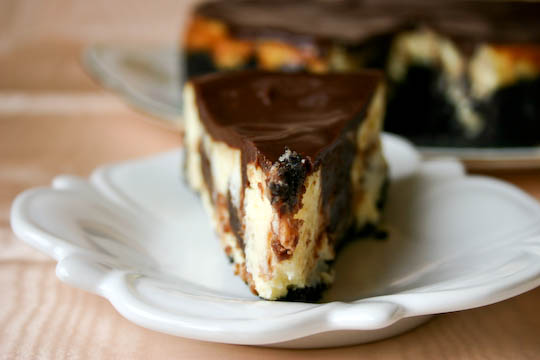 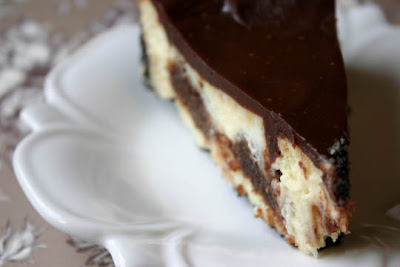 I could eat cheesecake everyday… except for that nagging little issue of fitting into my pants. It’s my favorite dessert. Birthdays, anniverseries, Thursdays, whatever the reason to celebrate, some people do cake, some people do ice cream. I do cheesecake.
You can bet when I get married I’m going to have a cheesecake wedding cake. Is that even possible? 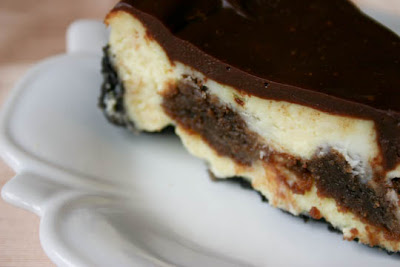 So it’s probably a dangerous thing that I know how to make one now. A cheesecake, that is, not a wedding cake. Especially this cheesecake. This was rich and over-the-top with squares of fudgy, chocolatey brownies mixed into the batter and an addicting Oreo crust that I could have seriously eaten by itself if that sort of thing were socially acceptable. And the ganache over the top was perfect, especially since mine developed a giant fault line down the middle somewhere between coming out of the oven and cooling. Not only did the ganache cover it up, but it seeped into the cheesecake in parts and was super delicious. 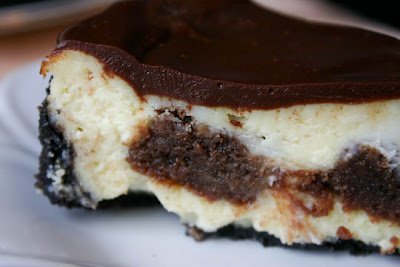 If you love cheesecake as much as me, this is a recipe that I know you’ll love. And the best part is you end up with lots of extra brownies it’s actually really easy and uncomplicated to make!

Preheat oven to 350°F. Line a 13×9-inch baking pan with foil, with ends of foil extending over sides of pan. Grease foil.
Microwave chocolate and butter in large microwaveable bowl on high 2 minutes, or until butter is melted. Stir until chocolate is completely melted. Stir in sugar. Blend in eggs and vanilla. Add flour and salt; mix well. Spread into prepared pan.
Bake 30 to 35 minutes or until toothpick inserted in center comes out with fudgy crumbs (do not overbake). Cool in pan on wire rack. Remove brownies from pan using foil handles.

Cool brownies, then cut them into 3/4- to 1-inch squares for use in the cheesecake (using a pizza cutter works best). Loosely measure out 2 cups of brownies cubes and add to cake batter as directed below. Eat extra brownies for breakfast. 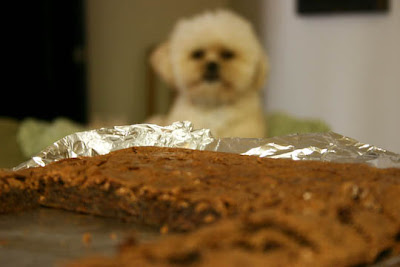 Make crumb crust as directed above for 10-inch cheesecake. Preheat oven to 350°F.

Beat together cream cheese and sugar with an electric mixer until fluffy. Add eggs, 1 at a time, then vanilla, beating on low speed until each ingredient is incorporated and scraping down bowl between additions.

Fold 2 cups of brownie cubes in very gently and pour mixture into prepared pan. Put springform pan with crust in a shallow baking pan. Bake in baking pan (to catch drips) in middle of oven for 45 minutes, or until  cake is set 3 inches from edge but center is still slightly wobbly when pan is gently shaken.

Place finely chopped chocolate in a medium size mixing bowl. Scald the butter and cream together in a saucepan (or in the microwave on high for 1 minute). Pour the cream mixture over the chocolate and stir until the chocolate is completely melted. Whisk in vanilla and then whisk in powdered sugar until smooth. Spread over cheesecake while ganache is still warm. Chill until ready to serve. 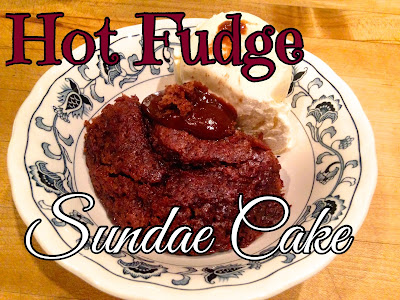 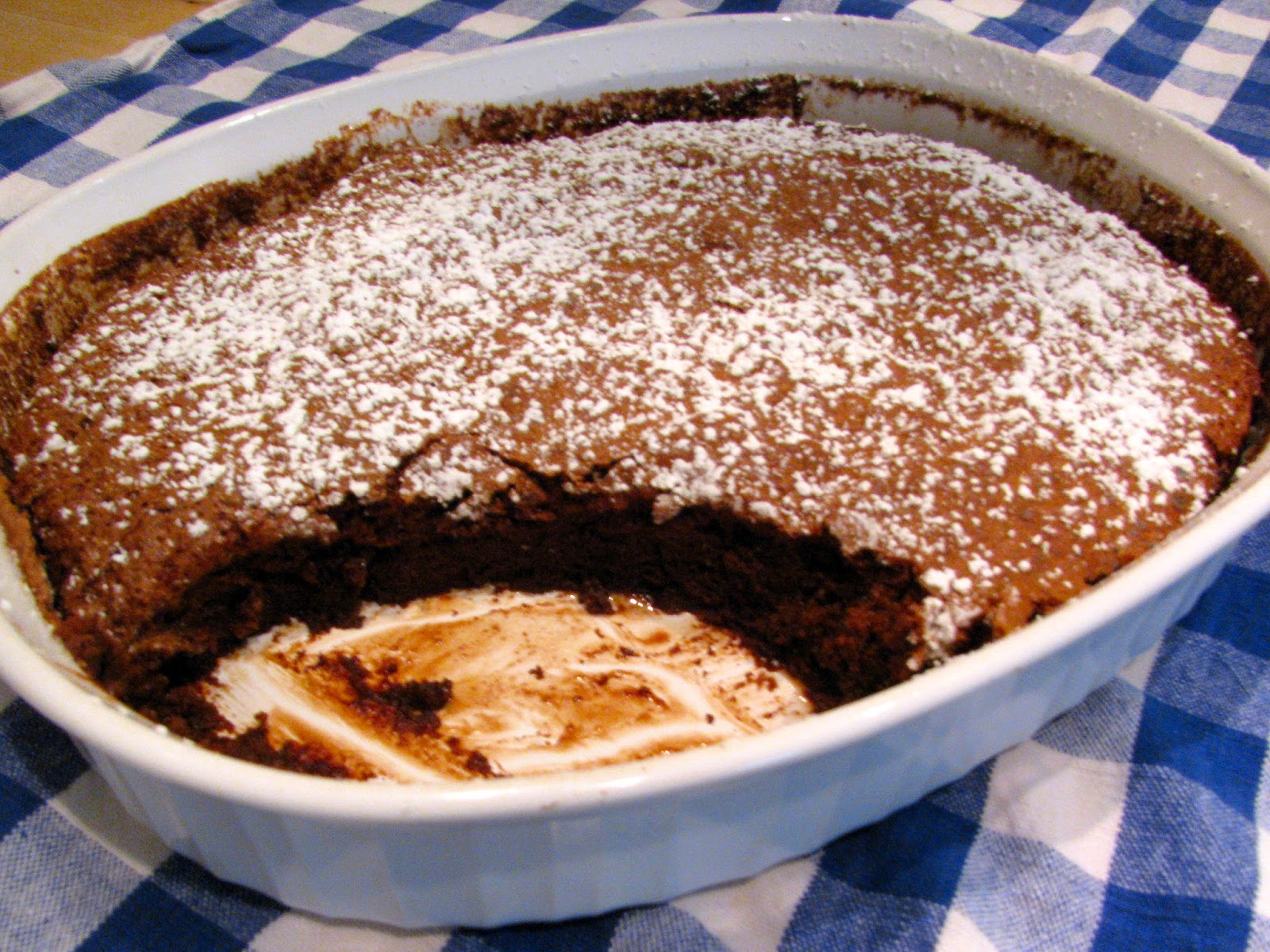 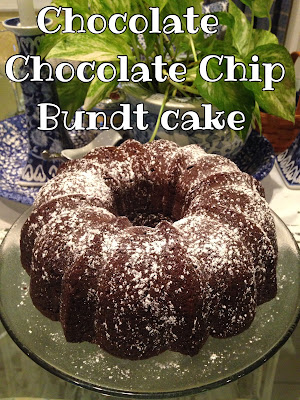