Okay, so I admit it, I’ve been a bit obsessed with pumpkin lately. I hope all of you are as obsessed about it as I am! If not, don’t worry, I promise that I’m moving on to new things and new flavors. I won’t promise that this is the last pumpkin recipe, because I know that as soon as I do that, I’ll jinx myself and will only be able to think of recipes for pumpkin. Maybe I’m superstitious, but I just can’t make that promise.

This recipe is a new take on an old favorite–pumpkin pie. It’s unique because it’s baked in a slow-cooker. This cooking method isn’t the only thing that sets our recipe apart, however. This pumpkin custard doesn’t have a crust like it’s traditional cousin. Yep, it’s just the good, creamy custard. 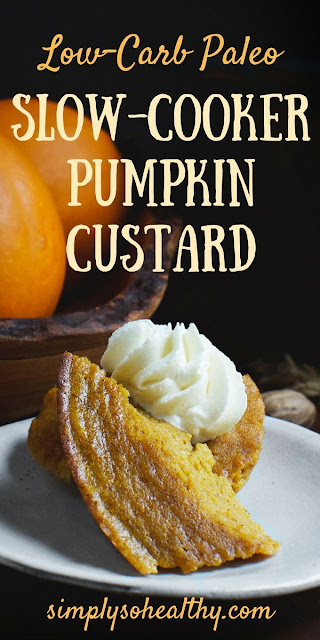 The thing I love about this custard is that there’s no crust to deal with. This makes it super-easy to whip up. Sometimes I just don’t feel like futzing with a pie crust. I also love that I don’t need to heat up the oven just for one little dessert. Just pop all of the ingredients in the slow-cooker and let it go to work. The slow-cooker doesn’t heat up the kitchen on those warmer days, and also leaves the oven available to prepare dinner.

This custard is easy to turn into a Paleo-friendly dessert. All you need to do, if you don’t use butter, is substitute in coconut oil. For the sweetener, I use a stevia/erythritol blend, but if this doesn’t work for you, you can use another granulated sweetener. Just keep in mind that the sweetener I use is twice as sweet as sugar, so you may need to adjust the quantity to get the same level of sweetness.

I have made this recipe using both vanilla and maple extracts/flavorings. They are both delicious, just different. The vanilla is a more traditional choice, but the maple flavor adds a warmth to the recipe unlike anything else.

I used a 4 quart slow-cooker for this recipe. It’s the smallest one I have. You could probably make the recipe in one that is slightly smaller (cooking time may go up), but I would not use a larger one without doubling the recipe. The one I used is pretty bare bones and doesn’t have some of the bells and whistles some of the other slow-cookers have, but it was inexpensive and does a fine job. It just doesn’t turn off automatically when the food is done.

I love to serve this Low-Carb Slow-Cooker Pumpkin Custard while it’s still warm. I spoon it out onto plates, then top with a bit of stevia sweetened whipped cream and sprinkle with a bit of nutmeg. If there are any leftovers, I generally eat them for breakfast the next day. I can’t help it that I love eating dessert for breakfast. Enjoy!

Spray or grease the inside of a 3 or 4 quart slow-cooker crock using coconut oil spray or butter.
Break eggs into a medium mixing bowl. Blend until smooth and slightly thickened, using a mixer. Gradually beat in sweetener.
Add pumpkin puree and vanilla (or maple) extract to the egg mixture and blend in.
Blend in almond flour, salt and pumpkin pie spice. Continue to blend while , streaming in the melted butter, ghee, or coconut oil. When all ingredients are well mixed, transfer mixture to the slow-cooker.
Place a paper towel over the crock, then cover with the lid. The paper towel between the top of the crock and the lid absorbs the condensed moisture that forms on the lid and keeps it from dripping onto the custard.
Set slow-cooker to the low setting. Cook for 2-2:45 hours, and begin checking at the two hour mark. when custard is done, the sides will pull away from the crock and the center will be set. For me, it’s usually done in about 2 hours and 15 minutes.
Serve warm with stevia sweetened whipped cream and a sprinkle of nutmeg, if desired.